Imagine being born poor in a family of 17 children to parents who are unable to read or write. Now imagine that you are born poor, your family has 17 children, your parents cannot read or write, and you live on the farm where your mother was once a slave.

Now imagine that you live on the farm where your mother had once been a slave, she is unable to read or write, you are the 15th out of 17 children, and your family is so indebted to the landlord that you are required to work the fields alongside all your brothers and sisters in order to meet impossible quotas.

Now imagine all that…hold that reality in your mind and consider the idea that this would not be your forever life.

Of course sitting in 21st century America where there is literally a computer in every person’s hands makes this ‘fantasy’ a little less believable. We know that there are poor people among us.

But that level of systemically sanctioned generational debt and poverty…that can’t really exist. Can it? Could it?

Cease to be a drudge, seek to be an artist.

But that is the life in which Mary McLeod was born. She was the 15th of 17 children. Her parents were illiterate and had lived as enslaved laborers in America.

Her mother leased land from the man who once held papers that implied that not only did she belong to him as his property. But because legally she was considered his property so then were her natural born children.

Although slavery in America ended a decade before she was born in 1875, Mary McLeod was born into a family indentured to another family because of her family’s debt.

That’s right. Debt. Even though her mother had worked for free on the land where Mary was born for all but 10 years, when Mary was born, Mary was born owing money (her portion of her family’s debt) to the plantation’s owner.

Born into poverty and holding debt that was created to maintain a legally sanctioned debtors system to spread slavery’s long, dark shadows over the lives of children born free is the world Mary McLeod was born into.

That’s why she’s another one of my heroes. I can’t imagine being born into the life she was born into. Being born poor is one thing…but to be born poor and black and female at a time when either was a burden at best but ensured a life sentence of poverty and despair.

When a missionary showed up to her mother’s house when Mary was ten years old, the family was offered the chance to educate their children. Education wasn’t free. They family already poor and indebted would have to pay for their children to be educated. They could only choose one child.

They chose to educate Mary.

The whole world opened to me when I learned to read.

It was a very wise choice. Mary McLeod went to school. First in a small one room Mission School and then she attended the Scotia Seminary.

But Mary McLeod did not stop her education at Scotia Seminary, instead she persisted and followed her dream to become a missionary. To make that dream real, she attended what is now Moody Bible Institute in Chicago.

Unfortunately, for her she was told that ‘black missionaries were not needed’ after finishing her training. So Mary returned to her home in South Carolina and settled into life as a school teacher.

At 18 years old Mary McLeod Bethune had completed her education, started her career as a teacher, and married. At 18 years old, she lived above the station she was born into. And had she chosen to lived as a married school teacher in a small rural town, she would have been a respected member of her community.

Invest in the human soul. Who knows, it might be a diamond in the rough.

At 29 years old, I was still trying to find out who I was…and I’d been born to literate parents, as the oldest of 2, raised in a house my mother owned, and had two degrees of my own!

She started the school, which later became Bethune Cookman College, with 5 students. And legend has it that when she needed money to help fund the school, she would bake and sale sweet potato pies for $1.50 a pie.

She did not allow circumstance or happenstance to make her loose her focus. She ended her 14 year marriage in 1907, continued to build her school, served as national president for the National Association of Colored Women, founded the National Council of Negro Women, and advised Presidents Calvin Coolidge, Herbert Hoover, and Franklin D. Roosevelt.

I want to live a fearfree life. I want to be able to step past the things that are holding me back so that I can live a life that has meaning.

The things that are holding me back are primarily internal. Things like self-doubt, anxiety, grief, and anger get in my way.

Mary McLeod Bethune faced down illiteracy. She battled against sexism. She fought racism. She raised her son as a single woman. And she built a legacy for generations to benefit from. Her school that she founded more than 100 years ago still stands as one of the most prominent historically black colleges and universities in the nation.

We have a powerful potential in out youth, and we must have the courage to change old ideas and practices so that we may direct their power toward good ends.

Although every odd every laid out was against her, she persisted and she overcame. 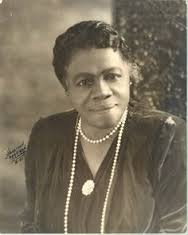 When I think about her life, when I think about what she came from…it makes my every excuse wash away. If Mary McLeod can be born poor, black, female, in debt, and to illiterate former slaves and yet change the world, what exactly is my excuse?

And she made a damn good sweet potato pie too!

*Recipe from National Council of Negro Women as found in The Black Family Reunion Cookbook: Recipes and Food Memories