We’ve been told so many lies about happiness…that I want to take some time during Women’s History Month to debunk three of the biggest ones.

These particular lies have been told to every little girl through media, peer groups, the disapproving gazes of great aunts and lesser players on the path to full-grown womanhood. These lies shackle themselves to your very soul and hold you down in spaces and places where you would better served…free.

These lies have been told for so long and to so many that to live your life not adhering to these social ‘truths’ is to go against the norm. To live your life and not abide by these rules is be deemed unfit and in some cases…a failure.

I call bullshit on each and every one of them. The first one being…

Who was in the room when this…the stupidest of all rules on how to be happy as a grown ass woman was made? Seriously, who voted for this shit?

How many billions of dollars are spent on the illusive search for thin? 20.

We gotta stop this insanity. It’s insane. It’s not about health. Stop lying. Every woman has sat in a room with her sister or her girlfriend or her doctor or her nail technician and said, “It’s not that I want to be skinny. I just want to be my healthiest self.”

Never mind that not even the women in this picture actually look like this. The truth is that this is what has been sold to us all as ideal and if we can’t achieve this ideal, it’s because we’re all big fat failures.

I feel that I’ve been at a bit of an advantage all my life. You see I’m 5′ tall, and in the words of my grandmother, built like a brick house. There was never any illusion on my part that I’d ever fit the mold of the willowy framed girl model on the cover of Seventeen.

I knew then that if I ate up the lie that thin was what I needed to be happy, I would end up hurting myself trying to achieve an impossible end.

We, every one of us, needs to get off this ride.

I am a proud diet industry dropout. I dropped out because dieting makes me unhappy at best but mostly it makes me feel like shit. When you’re on a diet, you spend weeks, sometimes months, force feeding yourself foods you pretend to enjoy to spend whatever time you can garner in outfits you mostly can’t afford to impress people you really don’t like.

It’s a cycle of abuse and neglect and it’s a waste of your resources. Imagine what women could do if they shifted that $17 billion of purchasing power away from a soul crushing industry that feeds off low self-esteem.

Women could unite and fund schools that eliminate the gender gap and educate girls with parity. 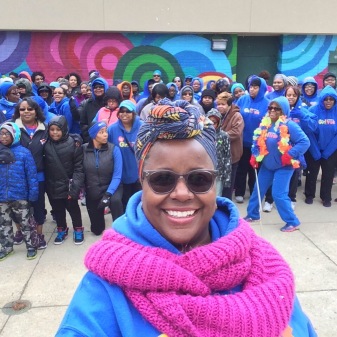 With 17 billion dollars, women could minimize the impact poverty has on the lives of elderly women.

17 billion dollars is enough power to break a glass ceiling.

It’s enough money to develop child care regulations to end the disparity in care from urban to rural and suburban communities.

17 billion dollars could make real changes for women all over this country.

Just imagine what we could do with that money. If we stood together unified first in the idea that happiness is not about thin. That thin is a lie we’ve been fed by an industry that has been made rich off of low self-esteem and manufactured self-hatred.

Imagine What Women Would Do With $17 Billion…

I know that for my portion, the money I normally spent dieting (which for me averaged out to about $750 a year), goes instead to supplement my son’s education through camps, and after school programs. I used another smaller portion of it for pedicures (because I like pretty toes) and really cool leggings to go walking in.

If only we could collectively stop listening to the lie that’s being told about how we’re not good enough because we’re not thin enough. Perhaps the truth of our collective unhappiness about our bodies isn’t about thin at all…

Maybe instead of thin we’re all craving something else…something more and because we live in a capitalistic society where everything has to be quantified…our more has been sold, sealed, and repackaged to us as the drive for thin.

I think it’s time we turn this thing on its head. We’re the customer. It’s way past time for us to demand a different sale.