Have you ever had a day that ran like something fully scripted out of a slap stick comedy sketch? And we’re not talking that clean back and forward banter Seinfeld stuff either…I’m talking full on Three Stooges pie in the face, nail in the foot, guffawing,  god-awful tomfoolery.

Well…allow my life to entertain you.

It Started with a Cough

My son was on the brink of an asthma episode. I could hear it in his voice when he called me after school. I reminded him about his Parent Teacher Conference meeting. Although I was working, I’d arranged it so that I could leave my office with precisely enough time to pick him up, drive to his school, and arrive in his classroom exactly on time.

I knew I would be cutting it close with only a 30 minute leeway but I figured…what could go wrong? Strangely enough for the first time in EVER nothing went wrong. When I arrived to pick him up he had his coat on and his backpack in hand. He was pleasant and strangely compliant.

My kid is my kid…we don’t do so good with compliant.

I knew he wasn’t feeling quite himself because of the way he was tilting his head. You ever have your kid tilt their head at just the right angle and think, “Now that’s gonna be a problem?” Well, that’s what I was thinking but I wasn’t sure how big of a problem it would be at the time.

He was coughing. I could hear the asthma windup but believed we were ahead of it. It sounded like a 2 treatment a day for 3 days kind of cough. So I hugged the kid and out the door we go. I drove, parked, got up the stairs in his school and plopped myself in the mini chair arranged outside his classroom at exactly the right time.

That never Ever EVER happens.

Then I hear the whiz in his breath and noticed he’s sticking to me like butter on fresh toast. I shrug it off because it’s Parent Teacher Conference. He must have some not so good news coming out of this conference.

I listen politely to what the teacher has to say about test scores. But I know that she knows that I don’t care and the only reason I haven’t opted out of him taking the tests, is because he’s a social kid and he’d disrupt his friends while they test. So to keep the peace, he takes the damn test.

Once we get past the test talk, he grabs his work bin. There’s so much contraband in that box, he could have held a yard sale and made a killing. I’m sitting there glaring at him, and trying to figure out how he snuck a math encyclopedia out of the house, when I hear labored breathing.

Asthma is a Punk

A week and a half’s worth of incomplete assignments later we’re walking out of the classroom. He’s like, “Are you mad?” And I’m like, “Mad? Nope. You just solved the TV debate for the next 2 nights.” He’s like, “What does that mean?” So I say, “You got too much work to do for any TV.”

Then he coughs for 30 seconds straight and I’m like, “Shit.”

He takes a sip of water. I ask him if his chest hurt (our signal that we’re in full-blown asthma flare-up). He gives me a side ways thumbs out. We head back to my office so I can finish up. 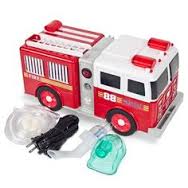 He sits at my desk to get started on the mountain of work he’s created for himself. But he’s social so anyone who walks even 100 yards close to my door gets a huge “HELLO! HOW YOU DOING!”

We stick around a bit, a colleague comes in smelling like cigarettes, high fives the kid. That’s all she wrote, asthma shakes his whole body.

By the time we get home he’s wheezing, coughing, and can’t catch his breath. He tells me he’ll set up his breathing machine himself. He’s 9. I trust him. I walk in his room, he’s playing WWE Batman v. Spider-Man and the tubing that connects his nebulizer to his face mask is the ring.

I sigh and do the prep work so we can go to school and work the next day. But it’s bedtime and asthma has snuck up on us exactly like a thief…taking little bit by little bit.

My son was diagnosed as an asthmatic before he was out of diapers. We know the drill. He gets a treatment under my direct watch at 10 pm. 9 hours later, we’re 3 treatments into full on war. I call it, he’s missing his first day of school (there goes our perfect attendance record). We gotta get this handled.

I fed him and set him up with medicine. He goes to my mother’s. He has enough homework to choke a horse so I know he won’t be attached to his tablet and the tv will be off. I get a call at the exact moment that I settle into my office after rearranging my day so I can pick up his new script.

He’s been away from me for less than 90 minuttes but he can’t catch his breath. I call our pediatrician. The nurse says to bring him in immediately. I pick up my umbrella because it’s raining and icy.

My umbrella is broke. I search my office for the back up umbrella, put on my hat and coat intended for 50 degree weather on this not quite 40 degree day. I forget to put on my walking shoes and head out in ballerina slippers.

My feet are soaked before I make it to the car. I go pick him up. He’s got on his hat and coat. He gets a brand new umbrella. We walk to the car. The umbrella is broken before he gets in the car.

It’s raining and icy. We’re 15 minutes late for our urgent appointment. The receptionist tells him his favorite doctor isn’t in. He’s like, “Let’s just go.” But he can’t breathe so we can’t go. They weigh him and take his height. He’s tickled that he’s only 3 inches shorter than me.

My office starts calling me because there’s an emergency. I can’t talk. I’m at the doctor’s with my kid. They frown big time on that there.

I’m praying this flare up won’t result in a round of steroids. Then in comes the most senior pediatrician at our practice. My kid knows and I know that he’s gonna have him diagnosed within seconds. He’s that good.

30 seconds into the exam, he says once daily steroids and recommends a mega breathing treatment. The monster treatment is given with a chicken mask. We laugh at the chicken mask.

My phone won’t stop buzzing. While the kid gets his mega treatment with the chicken mask, I answer it, “I got 2 minutes to answer any question you may have.” It’s about one of my (work) kids. He needs a ride. I’m the only person with his transportation’s contact. I remind myself being the only one with certain information is a stupid idea…but confidentiality is real.

With my 2 minutes, I arrange transportation and rearrange another appointment.

My son is breathing. Life is good.

Then he asks for Chipotle. He just started breathing and now he’s got a taste for Mexican. And it hits me, I gotta buy snacks for a meeting for a group a kids for the next day.

A Comedy of Errs

We leave the doctor’s office. It’s still raining. We’re one umbrella down. In the store I’m moving as fast as I can because my rearranged appointment starts in an hour. Our pharmacist is like, “Another rough night, mom?” They know me there. I nod. She gathers my order.

The kid INSISTS on pushing the cart. I’m moving as fast as I can. He’s moving as slow as he can.  I say snacks and like a rabbit out the gate, he takes off down the aisle. But he’s looking for a movie because it’s his day off. I INSIST that he follow me.

We grab enough snacks to satisfy 20 teenagers. He coughs gives me a sad eyes, next thing I now Fantastic Beasts and Where to Find Them has found its way in our cart. Then the cough.

I get him out of the store. My last umbrella bends. I think, “Of course.” It’s still raining. Traffic is so slow and I’m a slow driver. By the time I get him back to my mother’s house, I’ve got all of 3 minutes to make it to my office in time for the rearranged appointment. I text my colleague and step into a massive puddle. That’s when my umbrella folds upward and the wind blows my shirt up allowing me the pleasure of flashing oncoming college students.

Out of breath and drenched I arrive for my appointment 3 minutes late. That’s when office staff inform me that my appointment has in fact left the building.

I make it to my office in time to rearrange more appointments that I’ve missed only to learn no one is available. I decide to eat lunch and burnt my popcorn.

There are days when you get to win. Things actually fall into place and your life sings. Then there are days when absolutely nothing you plan actually happens. So do you fight it? Do you curse the skies and decide that the world is against you? That destiny itself is laughing in your face?

Or do you release it and say, “Okay life. Show me what you got.”

There was a time when I would fight it. For the most part fighting life, just made me tired and angry and resentful and unpleasant. I didn’t want to be around me.

So take a deep breath. Exhale and remember…you got this.

At the end of a pretty ridiculous day…I stood next to the greatest kid I’ve ever met and shared our Scout story. When asked what he liked best about being a Cub Scout, he shared with the interviewer, “Spending time with my mom.” And in that instance I knew…I’m winning.

Fearfree…it’s not just a motto. It’s a lifestyle.